Newspapers contain a vast wealth of genealogical information. They report about people and local news and show the opinions, issues, and the way of life at a particular time and place. 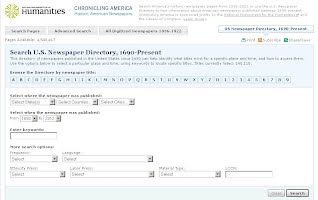 On Chronicling America, users can search for genealogical information in historical American newspapers published from 1836 to 1922. Users can conduct keyword searches, and search terms can include names of relatives. Users can limit their results by state, date, newspaper, and page number.

Users can search also for the newspapers published in their family members’ area when they lived there in the Chronicling America’s newspaper directory. It lists U.S. newspapers from 1690 and allows the users to conduct a keyword search, to search by the LCCN (Library of Congress Control Number), and to limit the search results by frequency of publication, language, ethnicity of the press, type of labor, and type of material. Each newspaper record has information about the newspaper (e.g. title, date range, and place of publication) and the libraries and online sources that hold the newspaper.

The following sections are useful for genealogical research:

Death notices often provide a person’s date of death, the date of the funeral, the spouse’s birth name, the place of burial, and the names of the mourners.

Legal notices can show whether a person went to legal court, has his or her name in a will, or has left assets for heirs after death.

Passenger lists can show where and when a person traveled and with whom.

Obituaries can include biographical information including a biography, the person’s birth place, and names of the person’s family members. With the names, users can search for their extended family members. Direct ancestors may move out of an area, but their relatives may stay and produce descendents. Older obituaries often showed the person in a positive slant, so readers should look at them with skepticism.

The genealogy guide by the Hawaiian and Pacific Collections of Hamilton Library: http://guides.library.manoa.hawaii.edu/content.php?pid=143954&sid=1224807

For books on doing family research, browse the bookshelves at Hamilton Library (or your local public or academic library) between the Library of Congress call numbers CS 1 and CS 47. Here are some relevant books about genealogical research available at Hamilton Library:

Some people have conducted genealogical research on Chronicling America and created these blog entries in the links below:

Heather Rojo used the Chronicling America site to find articles about her distant relatives, the husband and mother-in-law to Queen Liliuokalani, the last reigning monarch of Hawaii. She chronicled her search in her blog, Nutfield Genealogy:

We will be hosting a Hands on Workshop: Searching in the HDNP

Come and we will help you search for topics you are interested in!

The University of Hawai’i Kaleo Newspaper has kindly written about us in its last weeks edition:

Yesterday we gave a presentation called:

You can find our presentation here:

Thank you for attending!

Ever dusted off a really old newspaper or magazine, and found yourself reading it, drawn in by what people were saying and doing back then?

Ever thought, “Now this is the kind of history I like!  No boring timelines or profiles of historical figures.  Feels more like I’m listening to everyday conversations.”

Now there are lots of old – as in more than a century old – Hawaiian newspapers archived online for free.  Some of them read like Facebook!

The UH Library has just announced the online archiving of Pacific Commercial Advertiser, a paper first published in 1856 with Hawaiian-language section Ka Hoku Loa O Hawai’i (The Morning Star of Hawaii) for its first five years.  The PCA went daily in 1892, and merged with the Honolulu Advertiser in 1921.

This is part of the already 200,000 pages of 21 old local papers archived and searchable for free at the Hawaii Digital Newspaper Project (http://hdnp.hawaii.edu).

Martha Chantiny, Co-Principal Investigator of the HNDP, says, “We’re very pleased to be a participant in the NDNP creating a permanent archive at the Library of Congress.  Newspaper is heavy, takes up enormous shelf space in libraries, and biodegrades.  Microfilmed newspapers get scratched and lost.  Storing and keeping track of master copies is complex and costly.

“The LOC has created a centralized online repository which will eventually cover all fifty states – and will keep these newspapers accessible to anyone anywhere anytime.”

UH students might find particularly interesting the PCA’s “Local Brevities” column, which from 1884 offered information on births, deaths, daily tidings, musings, and events for many locals.  It was essentially Hawaii’s first Facebook.

Entries are often weird, amusing, and gossipy.  For example:

“E.H. Edwards, the vanilla planter of Napoopoo, is laying out land between his vanilla estate and that of Mr. Woods for the benefit of small farmers who want to engage in vanilla growing.”

“Alex K. Aona consents that the divorce case brought against him by Ellen K. Aona may be heard at any time without further notice to him.”

“A Japanese athlete named Matsubara is likely to be pitted against Seal, the German strong man, for a lifting match.”

The archives may also be useful for researching term papers on historical arguments.  Many of the newspapers are politically colonialist in attitude — pro-Annexation long before the Bayonet Constitution.

Charise Michelsen, a graduate student in the Library and Information Science Program, offered a positive review.

“The database allows to search words and terms located in newspaper text.  For instance, I searched female occupations, and found among many hits a fascinating article about the development of new occupations for women during the late 1800s.  It was in The Hawaiian Gazette. September 16, 1885.

“It is a great service to UH students as well as the general public,” she said.

“Chronicling America is a great online resource for college students or anyone seeking information of old Hawai’i.  It’s also a great resource for finding family members.

“Last semester I took a Hawaiian Genealogies course and had to research my own genealogy.  This website would have helped me a great deal.  The best thing is that it is free!  Now people and events of old Hawai’i are easily searchable.”

Users can browse other digitized American newspapers at (http://chroniclingamerica.loc.gov), with essays written by archivists putting their editorial bents in historical context.

Over a twenty-year period, the National Digital Newspaper Program will continue digitizing historically-significant newspapers published in all U.S. states and territories published between 1836 and 1922, as a partnership between the National Endowment for the Humanities and the Library of Congress.

The UH Manoa Library Guide to Chronicling America may also be found at http://guides.library.manoa.hawaii.edu/chroniclingamerica.

University of Hawai’i at Mānoa

The UH Library is pleased to announce new additions to the open-access archive of 19th and early 20th century English language newspapers published in Hawaii,  offering a glimpse into the lives of Hawaii residents more than a century ago.

The Pacific Commercial Advertiser (PCA), first published in 1856, began as a bilingual weekly with a Hawaiian section Ka Hoku Loa O Hawaii (The Morning Star of Hawaii) that ran for five years. The PCA became a daily in 1882, and eventually merged with the Honolulu Advertiser in 1921.

The PCA is the latest newspaper to be covered by the “Hawai’i Digital Newspaper Project”, [http://hdnp.hawaii.edu] which has digitized over 200,000 English-language newspaper pages.

Of particular interest is the PCA’s “Local Brevities” column. From 1884, it chronicled the comings and goings, life events, deaths, and even musings of people living in Hawai’i — a feed of information that was essentially Hawaii’s first Facebook!

There are notices about locals’ health and tidings, want ads and sales, as well as names and activities of guests who had arrived in town. The notices are quite detailed – dates, places, times — and occasionally contain little jokes and bon mots.  People with long-established roots in Hawai’i may even discover a relative.

On the open-access Chronicling America website [http://chroniclingamerica.loc.gov], users can browse and search this and other digitized American newspapers and read essays about them.

The IFLA Newspapers Section is currently seeking papers on or about outreach and marketing strategies for using or promoting online newspaper content, text mining, users of newspaper content, and use of news content for research purposes or as primary sources for historical or contemporary themes for its upcoming United States-hosted conference.