NEH has announced that two new partners are joining the National Digital Newspaper Program this year. Awards were made to the University of Nevada, Las Vegas and the South Dakota Department of Tourism and State Development to digitize newspapers from Nevada and South Dakota. The number of participants in the program is now 39, including 37 states, one territory, and the District of Columbia. Hawaii joined the NDNP in 2009. NEH and the Library of Congress aim to have every state and U.S. territory represented in Chronicling America. http://www.neh.gov/divisions/preservation/grant-news/nevada-and-south-dakota-join-the-national-digital-newspaper-progra

Finding a Hawaiian idol can cause quite a stir. When Alatau Leonard Charles Atkinson got a four-foot wooden idol, hundreds of native Hawaiians rushed to Atkinson’s office to name and claim the idol as their families’ family idol.

Museums and collectors offered to purchase the idol. Atkinson sold it, but to who? Read more about it in “He Parts with His Idol.”

In 1852, a captain’s young son fell overboard at a Guatemalan harbor, and a shark, which already killed another shipman three days ago, was swimming nearby.

Kala, a Native Hawaiian working on a ship far from his homeland, jumped into the water to kill the shark. Did Kala succeed?

Read more about it in “Kala Kills Sharks.”

Boingboing.net recently featured our ukulele ads collection on Flickr, so those ads have been getting a lot more hits than usual!

We’ll be uploading even more ukulele ads in the next four weeks, so keep checking back!

Rejected by his lover Luukia, ancient Tahitian high chief Moikeha sailed 2,300 miles from Tahiti to Hawaii, became an alii in Kauai, and started a family. Read more about it in “The Story of Moikeha.”

Start of the University of Hawaii at Manoa

In 1907, the University of Hawaii started out as the College of Agriculture and Mechanic Arts. Hawaii Governor George Carter and the newly formed Board of Regents discussed the college’s formation, including the campus’ location and buildings.

Read more about the informal discussion about the development of the future UH Manoa campus in “Agricultural College Start.”

Shopping Hints for Visitors to Hawaii 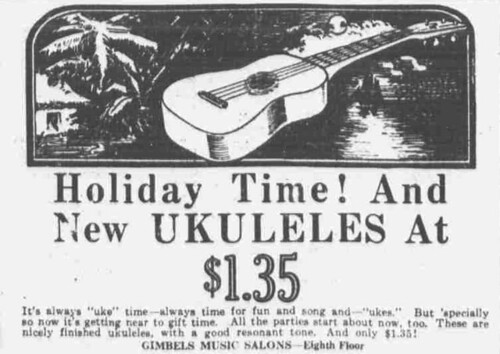 Over a hundred years ago, the Hawaiian Star recommended a few curios: Hawaiian calabashes, weapons, tapa cloth, and jewelry. Read more about it in “Shopping Hints for Visitors.”

In a story, King Kamehameha sentenced Okame, a fisherman, to death for insulting the fire goddess Pele. Kamehameha loved shark fishing, so he used his prisoners as shark bait, which was soon to be Okame’s fate. However, Okame realized that he could help Kamehameha capture a huge shark without and survive. What happened to Okame?

Read this story, “Okame, The Shark Hunter,” in The Washington Times.

In 1909, four women from Hawaii would go on a four-month tour of the U.S. Pacific Coast. The Seattle Star says Florence Kim-Fung Ho was “one of the most interesting fair visitors” and describes her as an American “except for her Chinese features”: “She speaks and acts just as any American young woman would, and she is thoroughly interested in teaching.”

Ho describes how children in Hawaii do not dress:

“A few years back the children of the Hawaiian islands may have gone to school scantily clad, or in some case clad as nature adorned them, but those days have passed.”

Another woman on the tour, Elizabeth K. Victor, a granddaughter of former governor S. K. Kipi, expresses her pride in her Hawaiian culture:

“I am very proud of my country, and while I have always thought our music the most beautiful in the world, I am more than ever in love with it since hearing it far away from home.”

Read more about these women in “Chinese Girl Who Teaches in Hawaii is Visiting Here.”