New to Hawaii? Then you might want to learn these Hawaiian words: mauka, makai, pau, kamaaina, kanaka, and wahine. Read more about Hawaiian words in “Native Words Still Used in Honolulu City.”

Hawaiian Entertainers on the Mainland Ads 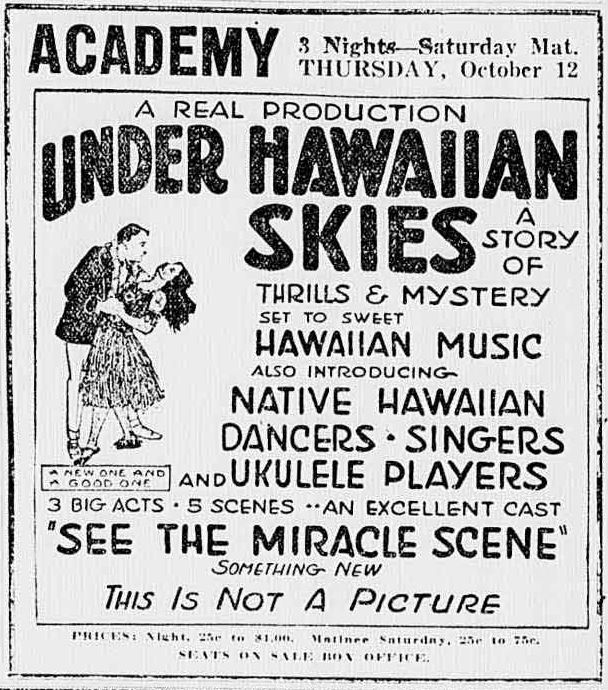 March 30, 1820: After 164 days of traveling through the United States and sailing through the Pacific Ocean in the Thaddeus, fourteen missionaries (seven mission couples) arrived in Hawaii at Kawaihae and Kailua-Kona, Big Island. The American Board of Commissioners for Foreign Missions funded these missionaries, who were Presbyterians, Congregationalists and Dutch Reformists from New England.

Robert W. Wilcox served as the Territory of Hawaii’s first congressional delegate. During his single term from November 6, 1900 to March 3, 1903, he lived in Washington D.C. with his wife, Theresa Owana Kaʻohelelani Laʻanui, and their two children. Read about the Wilcox’s family’s time in Washington D.C. in “My Year in Washington.” Language changes over time. The speakers’ encounters with speakers of other languages and cultural changes can change language. In the 1800s, Hawaii experienced Westernization, which greatly affected the Hawaiian language: the written form of Hawaiian developed, English became the official language for government and education, foreigners from many countries came in, and the diseases introduced by foreigners decreased the Native Hawaiian population. Lesson Plan: Etymology of Luau.

Last Batch for the Third Phase

The last batch of newspapers for the third phase of HDNP are up:

Want to hire a servant?

In 1912, a group of women discussed issues with their servants, including those who refused to serve girls. Would you agree with treating servants strictly? Read more about it in “Servant Problem in Honolulu, Fruitful Topic for Discussion.”

In 1904, Peleliilii said he went up Mokuaweoweo (summit crater of Mauna Loa) and saw over 1,000 ghosts of “all nationalities” and all ages:

“The babies came and sat in my lap, the old ones walked around me and some were lying down. They were playing all kinds of instruments except a drum. … there were many animals.”

Peleliilii said he usually threw money or liquor into the crater. But this time he came empty handed, which angered the hungry ghosts.

Read more about it in “He ‘Saw Things’ at Mokuaweoweo.” Would you marry somebody you met through a picture and a brief description and move to an unknown land? That was what nearly 20,000 Japanese, Okinawan, and Korean women did from 1908 to 1924, and they immigrated to Hawaii. Read more