The sunbathers and surfriders ride their canoes over the surf at Waikiki beach. The rainbows fill the island airs. Princess Ruth throws live piglets, bottles of gin, and tobacco into the Kilauea Volcano lava to stop it.

As the United States expanded into the Pacific region, Charles Warren Stoddard (1843-1909) was among the writers who introduced the Pacific to Americans. Known for his South Seas tales, the American author and journalist described the sights and sounds of Hawaii after his 1864 visit. … Read the rest of the story

In the late 1800s, a ship coming to Honolulu Harbor was big news. It meant arriving people, goods, and mail.

John Charles “Charlie” Peterson watched for arriving ships from Diamond Head from 1885 to 1907. Looking through his five-foot-long telescope, the former sailor could recognize ships from thirty miles, day or night regardless of weather. Peterson was known for his accuracy. Whenever Peterson spotted a ship, the Swedish immigrant called the Hawaiian Electric Company and say “Ste-e-e-mer–off Koko Head!” in his Swedish accent. HECOs’s whistle would scream three long blasts for all Honolulu to hear. This meant the ship would arrive in two hours, and people rushed to the harbor. Read more.

In a fictional story, Kanaka Jack was found cast away on the western coast of Australia. Hired as a cabin boy for a ship, the native Hawaiian could remain underwater for more than a minute, swimming into marine caves and through seaweeds.

Read more about Kanaka Jack in “The Chosen Boy and the Rescue.”

Today in history — January 17, 1893 — a group of businessmen with the aid of U.S. marines would overthrow the Hawaiian monarchy and remove Queen Liliuokalani’s authority as Hawaii’s head of state.

The Pacific Commercial Advertiser advocated U.S. annexation of Hawaii and proclaimed that day “will go down to history as one of the most eventful of all days in Hawaiian annals.” Read more about it in “The New Era.” 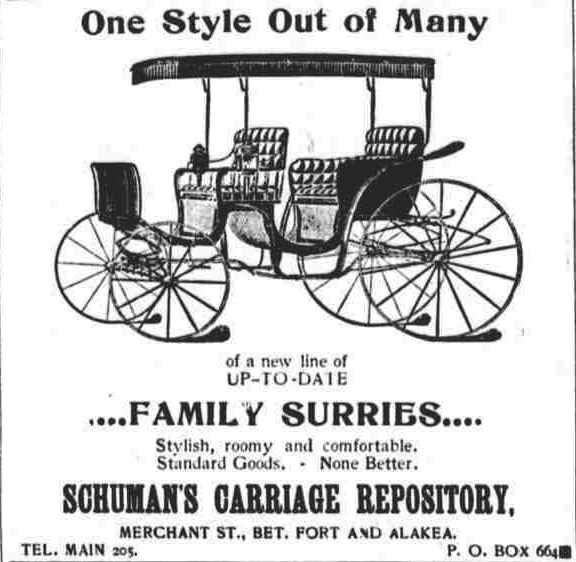 Before automobiles were horse-drawn vehicles. Instead of an engine and a gas tank, the owner had to take care of horses, and horsepower had a literal meaning back then.

You may know Schuman Carriage as a former car dealer. But did you know it started out by selling carriages and horses in 1889 and offered repair services?

Schuman Carriage and other carriage dealers advertised their carriages in Hawaii newspapers at the turn of the 20th century (1900s). View these ads in our Flickr collection:

“When the ring had been placed on the bride’s finger, and the solemn words of the … sacrament of the church spoken, the blushing princess yielded her hand to her husband, who gravely kissed it. Then her cheek was claimed by a dozen men friends who claimed the happy privilege of the moment, and by her women intimates, who overwhelmed her with good wishes.”

Read more about it in “Prince and His Bride.”

The future queen of Hawaii, Emma Rooke was born in Honolulu. She would marry King Kamehameha IV, give birth to Prince Albert Edward Kamehameha, and run for Queen of Hawaii. Read more about Emma Rooke in this topic guide.