In the Christmas of 1911, the Malihini Christmas Tree program gave presents to 1,700 less fortunate children, many of them from immigrant families. At 10 a.m. on Christmas, children lined up to receive presents from Santa Claus. Read more about it in “Fifth Malihini Tree Glittered in Christmas Sunshine.”

Today in history — December 23, 1900 — the first significant group of Puerto Ricans arrived in Honolulu Harbor on the ship “Rio de Janeiro.” As the ship was approaching the harbor, the eighty-one men, women, and children from Puerto Rico and Italy gathered on the steamer’s deck and were eating bananas and singing native songs.

Only half the original passengers arrived. The other half ran away in California after they were told that they would become slaves to the Chinese and work for only twenty-five cents a day.

Read more about it in “Porto Ricans Are at last Landed.” 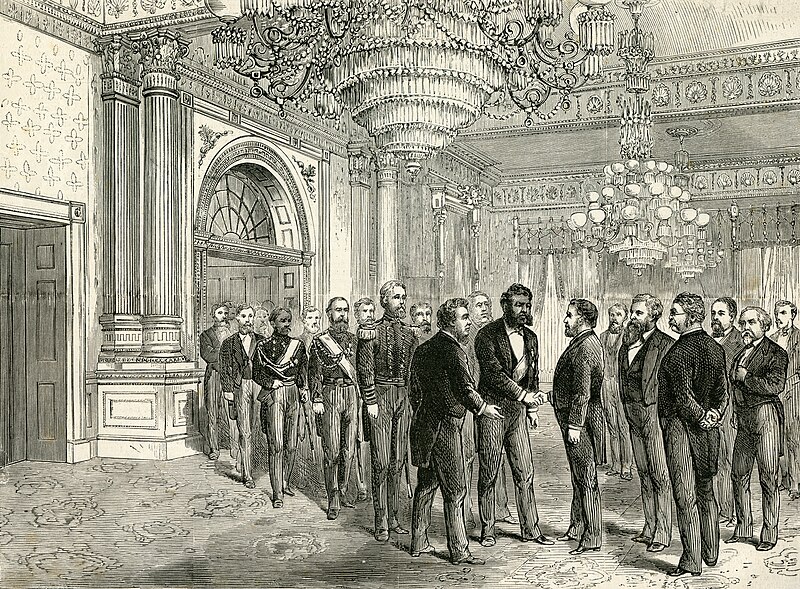 King Kalākaua and Suite Paying a Formal Visit to the President in the Blue Room of the White House: Kalākaua meets President Ulysses S. Grant in the first state visit for a ruling monarch to the USA in December 1874.

Today in history — December 18, 1874 — A joint session of the U.S. Congress received King Kalakaua. This event marked the first joint congressional session to ever receive a foreign head of state.

Thousands of people waited on the street in front of Capitol Hill, some for hours, to see the Hawaiian King. However, disappointed thousands had to leave without seeing him, as spectators quickly filled the rotunda and corridors:

“As early as 10 o’clock the rotunda and corridors were densely packed with the moving throng, all eager to gain admission to the galleries of the Senate and the house … At 10 ½ o’clock the doors were opened, and soon every seat was occupied, and by 11.15 o’clock, every foot of space in the galleries … was filled, while the outside corridors were densely packed by disappointed thousands unable to gain admittance.”

Japanese Families Immigrating to Hawaii in 1901 This week in history — December 18, 1901 — a thousand Japanese immigrants arrived at Hawaii’s docks every month. With their young families, Japanese men came to work in the plantations. Read more about it in “Thousands of Japanese Coming to the Islands.”

Today in history — December 11, 1871 — Honolulu celebrated King Kamehameha V’s forty-first birthday. Most businesses closed early or were closed for the whole day. People watched horse races at the plains of Kulaokahua and yacht and boat races. Read more about this national holiday in “His Majesty’s Birthday.”

Usage statistics for the Hawaii newspapers on Chronicling America are up:

– the number of Chronicling America “visits” initiated by users from Hawaii (based on IP address).

These metrics represent only the Chronicling America Web interface use of the data rather than all usage (e.g. API [application programming interface] actions or other data views.