In 1912, Halloween in Palama meant attending a party with two-thousand people of all ages.

The carnival in the gymnasium featured a “fish pond” of prizes, shoot the chutes, and pie-eating and apple-eating contests. Kids dressed in costumes: clowns, ghosts, and witches.

Read more about it in “2,000 People in Halloween Party at Palama.”

Following a Friend to Death

Would you follow your friend to death? Elizabeth Stevenson did during the funeral of her friend’s, Margaret Jerome Healy.

By Margaret’s open grave, as the last few words of the funeral service was being said, Elizabeth passed away: “Mrs. Stevenson’s heart, which has been weak, was unable to stand the tension of emotion and dropped quietly.”

The Hawaiian Gazette wrote about Elizabeth’s death in “Dies Beside Open Grave…” “Read more about it!”

Today in history — October 16, 1895 — Princess Victoria Ka’iulani celebrated her twentieth birthday in England, where she was studying abroad, surrounded by her friends and her father Archibald Scott Cleghorn. The Independent proclaimed,

For several years the alii has been absent from her native country, but although out of sight, she has never been out of the minds of her countrymen, and the many foreign residents in Hawaii nei, whose loyalty cannot be extinguished by ill-treatment, starvation, and threats from the interlopers who have turned her country topsy turvy.

Lawsuit for Second-Class Cruise with Asians 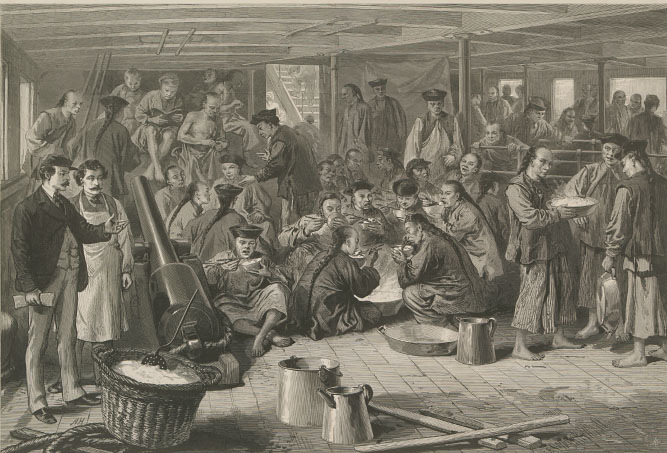 Want to cruise with second-class denizens called Asian people? In 1900, 142 Caucasian ship passengers sued for $20,000 because they paid for first-class accommodations, but instead got second-class with the “Asiatics.”

These … American citizens … nearly all [of them were] residents of this State, were treated worse than cattle while on the Rio de Janeiro …

Those Caucasian passengers boarded at Nagasaki, Japan, en route from Hong Kong to the United States–Hawaii and the U.S. West Coast.

… the men discovered that they had been assigned to the Asiatic steerage and were herded in with Chinese, Japanese, Filipinos and other denizens of the unsavory quarter. …

The Chinese and Japanese are not noted for their observation of sanitation and the condition of the Americans who were forced for a long ocean voyage to heard with the Asiatics became pitiful. Some of the men were made very ill from the fumes of … the opium smokers and the foul air of the close quarters; and not a man escaped severe attacks of dysentery, caused by the polluted drinking water, while three of them contracted typhoid fever.”

Read more about it in “Forced to Stay in the Steerage.”

This week in history — October 2, 1895 — Princess Virginia Kapooloku Poomaikelani passed away at age 56. A younger sister of Queen Kapiolani, Princess Poomaikelani served as one of Queen Emma’s trusted ladies-in-waiting for years and Governor of the island of Hawaii from 1884 to 1886. Read about her funeral in “Laid to Rest.”