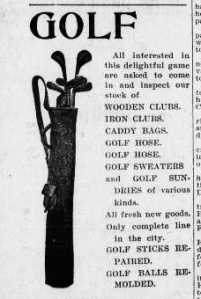 Today in history — April 16, 1895 — The Daily Bulletin makes the earliest mention of golf in a Hawaii newspaper:

“Golf has been introduced in Honolulu. It is played at Punahou near the college. This is a favorite Scottish summer game.”

Five months later, The Hawaiian Gazette suggests the land in the back of Oahu College (now Punahou School) as “an admirable place for golf links.”

On January 3, 1896, The Hawaiian Gazette reported that six people, including President Sanford B. Dole and Walter Dillingham, have formed a golf club, which planned to “[awaken] genuine golf enthusiasm on the islands” and increase the club’s membership.
Sources
“Local and General News”
The Daily bulletin., April 16, 1895, Page 5
http://chroniclingamerica.loc.gov/lccn/sn82016412/1895-04-16/ed-1/seq-5/
“Local Brevities”

This month in history — April 25, 1889 — Queen Liliuokalani’s mother-in-law, Mary Lambert Jones Dominis, died. She had a close relationship with her son, Prince Consort John Owen Dominis. Mrs. Dominis reportedly denigrated her non-Caucasian daughter-in-law, but, in her last years, appreciated Liliuokalani as a respectful wife to her son.

Read more about the owner of Washington Place (right image) in “Death of Mrs. Dominis.”