The University of Hawai’i at Manoa Library has digitized Hawaii’s English-language newspapers before 1923 and made them freely accessible on the Chronicling America website. On the website, users can browse and search digitized American newspapers and read essays about them.

In a twenty-year period, the National Digital Newspaper Program (NDNP) will digitize significant newspapers from all U.S. states and territories published between 1836 and 1922. NDNP is a partnership between two federal government agencies: the National Endowment for the Humanities (NEH) and the Library of Congress. The former provides funding for the program, and the latter will maintain the website.

Along with Chronicling America, the project also uploaded the newspaper pages to eVols, UH Manoa’s institutional repository, to provide another access point and backup.

The UH Manoa library has digitized and uploaded at least 301,097 pages as of June 2016 in three phases, each lasting several years.

Jennifer Beamer and Alice Kim–members of the library’s Desktop Network Services Department–developed and managed this website and the project’s social media. Ms. Beamer initiated this website.

Daniel Ishimitsu maintains the newspaper pages on eVols as the library’s programmer for digital collections.

Co-Investigators Martha Chantiny and Joan Hori and graduate student assistant Monica LaBriola developed the grant proposal, and the National Endowment for the Humanities (NEH) awarded $200,000 to the University of Hawaii at Manoa Hamilton Library to begin digitizing Hawaii’s English-language newspapers and chronicling their history.

In May 2009, UH Manoa Library received an additional award of $140,920 to digitize more newspaper pages.

The library digitized 100,000+ newspaper pages. To fund this endeavor, The National Endowment for the Humanities (NEH) awarded the library $270,000.

The program digitized the predecessor of the Honolulu Star-Advertiser, The Pacific Commercial Advertiser (1856-1921). For his phase, the library received $265,018 from NEH and digitized the following newspapers: 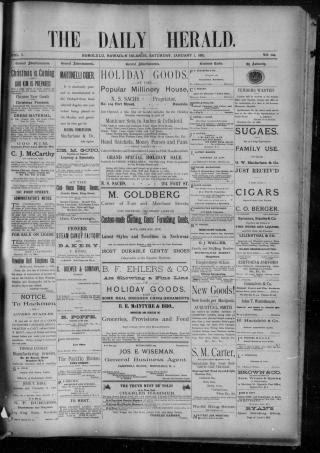 A sample of a digitized image of the Daily Herald.