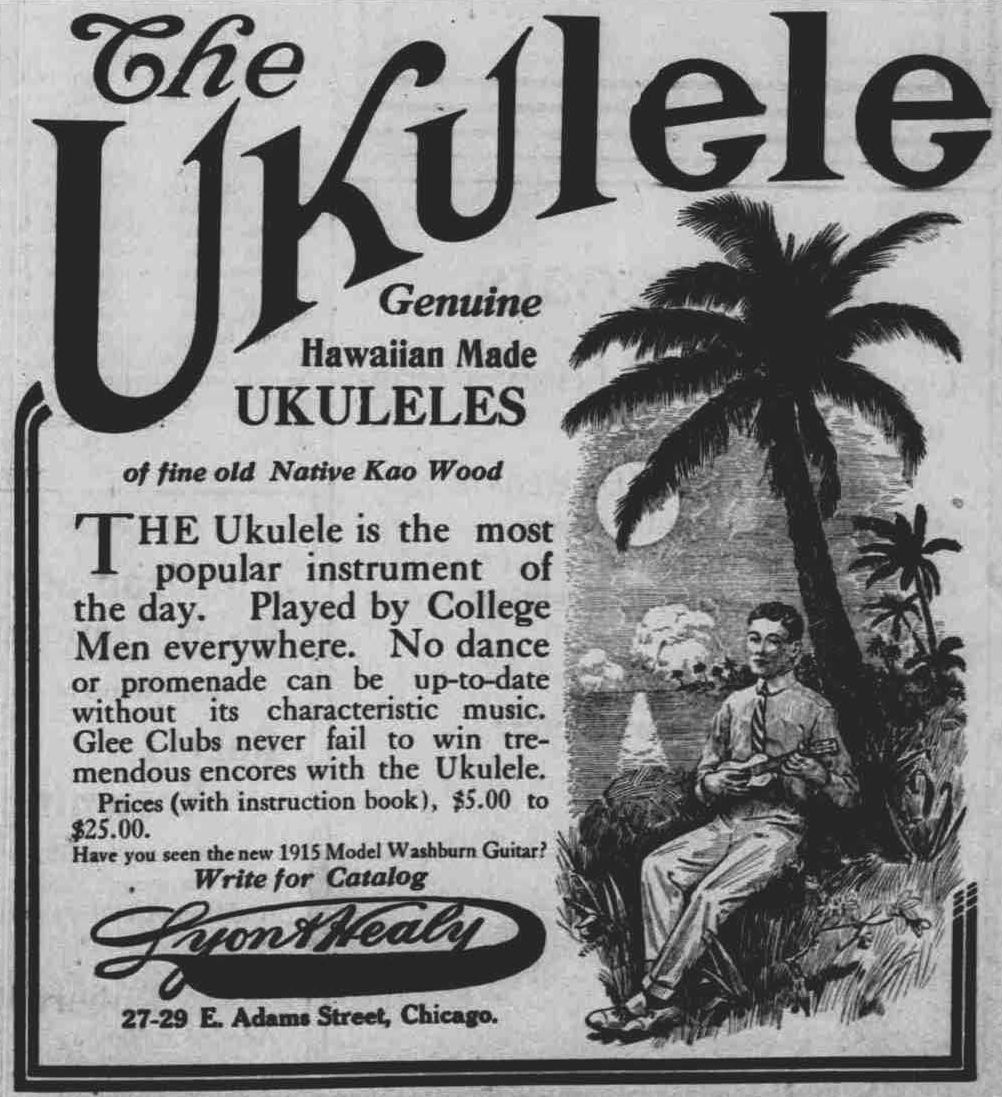 Most are from U.S. Mainland newspapers. Ukulele was once a fad on the Mainland, so I searched “ukulele” in newspapers from all states but Hawaii.

Since upload, the ukulele ads instantly became popular in our collection. Many viewers seemed to find them through searching “ukulele” on Flickr.

Growing Up in Hanalei, Kauai

When she was growing up in Hanalei, Kauai, in the 1850s, Mrs. T. J. King befriended King Kamehameha IV, Queen Emma, and Queen Kapiolani. King played pranks on Kapiolani–putting sand in her bowl of pink poi and hiding her shoes up the tree.

In the past five years, Father Damien and Marianne Cope became Hawaii’s first two Catholic saints. Brother Joseph Dutton could become the third. Like them, he spent the rest of his life, forty-two years, helping exiled leprosy victims in Kalaupapa, Molokai.

Brother Joseph wasn’t always a Catholic missionary. In Wisconsin, the civil war veteran succeeded in his career, but struggled with depression, a failed marriage, and alcoholism. At age forty, Brother Joseph adopted the Catholic faith, retired from his job, and started a new life. He told his friends,

I had a feeling that I wanted to be in touch with human sufferings, to be active in the relief of those of my fellow-beings who were afflicted, yet so as not to bring me in direct contact with the outside world.

Prince Henry of Prussia’s Visit to Honolulu in 1879 When King Kalakaua visited England in 1881, Crown Prince Frederick III of Germany thanked him for hosting a reception for his son two years ago:

“Your majesty … I came to salute you and … express my thanks to you, for your kind treatment of my son, Prince Henry, when he made a visit to your Kingdom. I shall present myself to Your Majesty tomorrow.”

Prince Frederick then bowed to Kalakaua.

A lady in the Hawaiian court describes her eyewitness account of Prince Henry’s reception at Aliiolani Hale (the judicial building) in a letter. Read more about it in “Impress of the Prince.”

In 1901, a Chinese playhouse opened at Liliha Street. Every night, the audience watched a show of romance, adventure, and tragedy.

The Pacific Commercial Advertiser reports, “The repertoire, it appears, is varied nightly, and impromptu changes and variations are at all times allowable. If one chances upon a play of tragic interest, he will probably be treated to an unusually loud banging of gongs, screeching of stringed gourds and wailing of the remainder of the inferno of Oriental orchestral instruments.”

Read more about it in “Chinese Play House.”